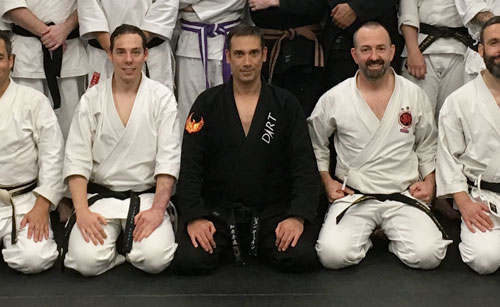 One of the UK’s foremost self protection and practical karate instructors, John Titchen is best known internationally for his highly acclaimed safe self defence scenario training and his critically acclaimed books and blog on traditional karate kata application and self protection.

John’s seminars, books, youtube videos and articles are very popular worldwide with those in the know amongst the growing number of groups and individuals looking to enhance their training through a pragmatic and safe approach to effective self defence. John writes articles on self defence and applied karate for his blog, and travels internationally to deliver self protection and karate seminars in addition to teaching regular self defence classes in High Wycombe.

John gained his first Black Belt in Shotokan Karate with the English Shotokan Karate Association in 1995 under Shihan Roger Hall 8th Dan. A former University and Secondary school teacher and co-curricular education specialist, John now has over 20 years experience of teaching in the field of martial arts and self protection, and has taught seminars in Canada, Europe and the USA.

John holds a number of different coaching and instructor qualifications and various Dan grades in Shotokan Karate and AoDenkou Jitsu and is registered as an instructor with the British Combat Karate Association and the British Combat Association. John has always had a passion for research and has shared his knowledge in interviews with Combat Magazine and Martial Arts Planet and as a regular columnist for Traditional Karate Magazine and the ezine Jissen. John has been recognised as the leading provider of safe scenario training for self defence in the UK. You can read more about John on his personal website here.

Written in 2004, John’s first book Heian Flow System: effective karate kata bunkai was published in 2007. In 2014 and 2015 John published his new internationally best selling four part book series Pinan Flow System: karate kata application for beginner to black belt and in 2016 he published his sixth book: Karate and Self Defence – Selected Articles. John featured as one of the guest authors in the 2018 book The Problem of Practical Karate. In 2020 John published his seventh book: Karate Beyond Kata – melting ice into water.

In addition to his research projects, international seminars and karate classes with the Practical Karate Association in High Wycombe and Princes Risborough John engages in voluntary work supporting expeditions with the Duke of Edinburgh scheme. John has an enhanced CRB/DBS, undertakes regular safeguarding and child protection training, has up to date first aid qualifications and is fully insured.

Haaqan first began his martial arts training in Karate at a children’s club in High Wycombe, learning sport karate, but switched to training in DART for self defence at the RGS High Wycombe club as a teenager in January 2009.

Haaqan is John’s longest personal student and has accumulated a great deal of experience in his methods having trained with him as a private student in DART as well as helping with book and video projects as a demonstration partner. Haaqan can be seen as one of the technique demonstraors in the Pinan Flow System series of Karate books. Haaqan has extensive experience of utilising his soft and physical skills in scenario training, working with martial artists from across the country. In March 2017 Haaqan graded to Shodan in DART Karate.

Haaqan is a qualified medical doctor  and is currently engaged in research at Oxford University.

Mikolaj  began  training in DART for self defence at the RGS High Wycombe club as a teenager in September 2015. Since that time he has trained at both the RGS Club and the evening classes in addition to cross training with HAVOC Founder Jay Cooper, HAVOC UK Instructor Simon Sheridan, and attending seminars in Ju Jitsu with Sensei Alan Murphy, kickboxing with Coach Lei Bridges, and BJJ with Scottish MMA fighter Tom Hepburn.

In September 2020 Mikolaj graded to Shodan in DART Karate. Mikolaj acts as a support coach for John and Haaqan.

Mikolaj is currently a student at Manchester University. 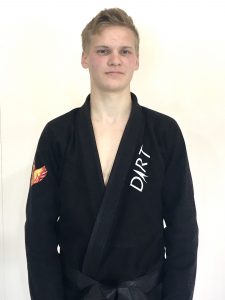 Mateusz  began  training in DART for self defence at the RGS High Wycombe club in September 2015. Since that time he has trained at both the RGS Club and the evening classes in addition to cross training with HAVOC Founder Jay Cooper, HAVOC UK Instructor Simon Sheridan, and attending seminars in BJJ with Scottish MMA fighter Tom Hepburn.

In September 2020 Mateusz graded to Shodan in DART Karate. Mateusz acts as a support coach for John and Haaqan.

Mateusz is currently an A Level student.

World class self protection training based in High Wycombe in Buckinghamshire.
Contact us

This is my third time visiting with John. Excellent session as ever, development of everybody that comes up here. It is a challenge for any martial artist to come and test what they’ve done through… the years, and see how they cope in enclosed environments and tough challenging situations, wearing the body armour just makes it so much more real for people. Fully endorse it. Thank you John. Read more … “Fully endorse it”

I am the Canadian Director of the Jeet Kune Do Athletic Association and have been involved in martial arts and Law Enforcement for many years now (far too many than I care to mention). John… is someone who I have known for some time now and I wholeheartedly endorse his approach and his teachings. Everyone – especially “seasoned” or experienced martial artists – should train with John any chance they get to see how much of what they know is applicable and more importantly how much isn’t. I don’t endorse many people, and believe me I do get asked a lot; this is one I am happy to offer without being asked Read more … “wholeheartedly endorse”

Karate is undergoing a revolution. Not a revolution that uproots the past, but instead one that returns to the past to water the roots of our tradition so that, after decades of stasis, it may… grow and flourish. There is no doubt in my mind that John Titchen is one of the leading lights of this modern revolution (re-evolution?). John is someone who I always enjoy discussing karate and self-protection with. Every time we talk in person or online I find myself reassured by our commonalities and excited by our divergences. John is also someone who, to me, embodies the warrior spirit. Easygoing and thoughtful in nature, but who has a determination and love of what he does that is as infectious as it is inspirational.”
John Titchen and his scenario training is excellent. John would probably be, in the UK at least, the go to guy (for Scenario training). Instructors want to know what they are teaching is realistic, but how can they be sure if they’ve never had been involved in a real situation? Getting involved in real situations is obviously not the answer! So how to we solve the seeming paradox of wanting to gain the vital experience needed without doing anything illegal, stupid or unethical? The answer is realistic simulation training and, for my money, John Titchen is the number 1 guy when it comes to providing such training in a professional, realistic and ego free way Read more … “the ‘go-to’ guy”

One of the most enjoyable days training ever, after many years of traditional tkd training this felt like the missing piece of the jigsaw! Well constructed with good feedback, a great leveller, physically tough and… emotionally challenging but ultimately most enlightening……. must come back! Read more … “physically tough and emotionally challenging”

Sensei John delivered a remarkable seminar, leaving us with a deeper understanding of the 5 Shotokan Heian Kata. His knowledge on the subject is staggering, spanning some 25 years of training. His teaching method was… structured and pleasant and kept all of us involved and interested throughout. It was a fantastic experience for all who took part. Truly an amazing experience for us all by a gentleman Sensei who not only shared with us openly an integrated system of Heian applications to make our Karate more complete, but also taught us invaluable life lessons with his example, attitude and indomitable spirit. Thank You Sensei John. Read more … “a fantastic experience”

a true understanding of his subject matter

I have been training in the martial arts for over twenty years and have been fortunate enough to have had some very good instructors. It is not often that I am truly impressed by another… instructor, but John Titchen struck me as being on a different level to most. A true understanding of his subject matter, backed up by a very impressive CV. Since training with John and his students I am keen to expose my own students to his training. Read more … “a true understanding of his subject matter”

My second simday, another enjoyable and rewarding day. It reassured many aspects of my training under pressure. It also showed some weaknesses and areas to concentrate on. Again loads to take away. I highly recommend… John Titchen’s Simday, if you want to test what you think you do. Read more … “Enjoyable and rewarding”

Sensei John was fantastic as an instructor and as a person. His teaching method was structured and pleasant and kept all of us involved and interested throughout.

A brilliant system, school and instructor. Run by a very intelligent, patient and thoughtful martial artist with a wealth of knowledge and expertise, able to mix the influence of other arts when necessary, whilst still… retaining very pure karate form when required. I will always encourage others to go and train at any events involving John and these guys whenever possible! Read more … “a brilliant system”

I enrolled my two sons to DART Karate to help my boys gain self confidence and techniques to defend themselves. My sons are now very confident, they carry themselves differently and John gives them all… the support and encouragement they need to progress through the different stages of the Dart Karate curriculum. They really enjoy the simulation days as they put into practice what they have been taught, every lesson is different and I wouldn’t hesitate to to recommend Dart Karate, John is a very positive role model. Read more … “a positive role model”

DART Karate provides safe, fun and effective self protection classes. I have trained with some great people and have learned loads in the five years I have been training.

I have been a long-term member and have learnt a huge amount about self-defence and how to keep myself safe anywhere.

An excellent club to learn how to defend yourself as well as spot and prevent dangerous situations from escalating. Highly recommended for anyone wishing to improve their fitness, learn an extremely effective (and fun!) martial… art and participate in real life scenarios allowing you to see ow you personally perform under pressure. Read more … “an excellent club”

I thoroughly enjoyed my time at DART. Not only is it fun and good for fitness, but the self defence that is taught is applicable to everyday life (unlike some other martial arts)

Excellent class based around practical skills for self defence against likely scenarios that most people would see, (without ending up in prison yourself!) Nobody dressing up and playing “special forces” here 🙂 just sound advice… and sound training. Read more … “Excellent class”

My son trains with Dr Titchen and from what I’ve seen, his classes are very relevant to the name of the club.

My son has attended for 3 years and really enjoys it. It helps him grow in confidence whilst keeping him fit and off the xbox!